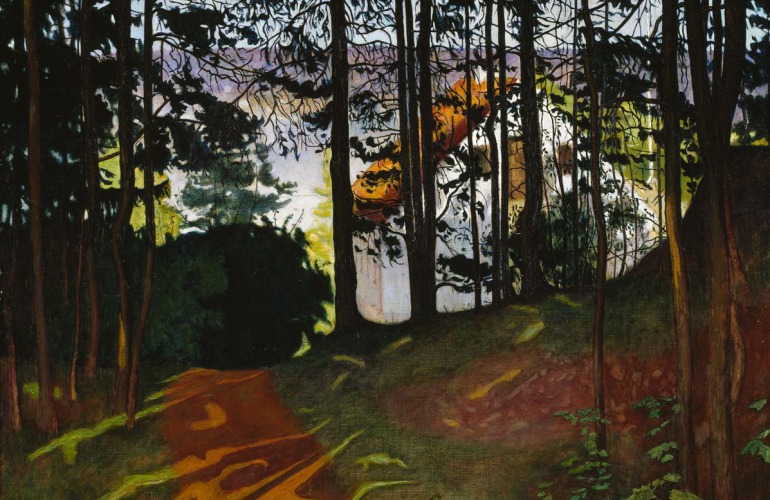 There is a haunting aura that shrouds the Norwegian landscape. Step too closely or linger too long and you might not escape. But maybe you don’t want to?!

Sohlberg’s most accomplished and much loved ‘Fisherman’s Cottage’ (below) is an odd painting in the sense that there is a conflict of emotions it evokes. You want to escape into the gloomy, soothing twilight and be swept away within this Nordic noir mystery. But just as quickly you want to run away from the dark looming forest that’s enveloping the enigmatic cabin on the lake. Basically, it’s a mind fuck.

Anyone remember the film ‘The Witches’ with the immortal Angelica Huston? If you do, then you can’t forget the horrifying scene at the beginning in Norway. Innocent girl gets taken by a witch and appears in the ruralistic painting hanging in the family home, left to grow old and die within its frame. It will forever be burned into my memory of childhood horrors! Not disimilar to Sohlberg’s paintings, there is an unspoken, uneasy impression that is hard to shake off.

Even a meadow of saintly white flowers hints at something mystifying and unnerving. That’s the power and charm of Sohlberg’s paintings, fed by his choice of simple colours. Earthy, sombre, placid – his palette has as edgy ethereal quality to it that makes you feel like you’ve stepped into a grown-up fairytale.

“Like Munch, he worked with a simplified palette – frequently white, black, blue, red or green – which helped capture something of the specific Nordic light, atmosphere, and mood. He also insisted that each painting must have one ‘dominant’ colour, which he would exaggerate with emotive effect.”

Although Harald Sohlberg is a lesser known contemporary of Edvard Munch’s, he is considered one of the greatest Norwegian landscape artists. I’d only recently heard of Sohlberg after Dulwich Picture Gallery showcased his work in celebration of 150 years since his birth.

Sohlberg’s atmospheric paintings are an escape into Norwegian territory; a snapshot of an enchanting rural landscape. There’s a kind of Romanticism to be admired. These places Sohlberg’s documented and imagined feel unreachable and just beyond our grasp, which is why there is an elemental compulsion to revisit these paintings again and again. Just don’t stay too long.

What a year we’ve had @iamgarethwells! A very up and down kind of year because of covid, and losing loved ones, but we’ve come through it with a place to call our own and the wedding we’ve been dreaming about for years! Bring on 2022 💪🤘 Wishing everyone love and support for the year ahead! 🧡
Cambridge Heath on the river
Catching the autumn colours before they go! 🍂🍂
Going out for sunday walks with the hubby! 🧡🍂🧡🍂
Couldn’t have asked for a more beautiful morning for our big day 💍🧡🍂
Standing in the pumpkin patch!! 🎃🧡🎃
Loading Comments...
%d bloggers like this: