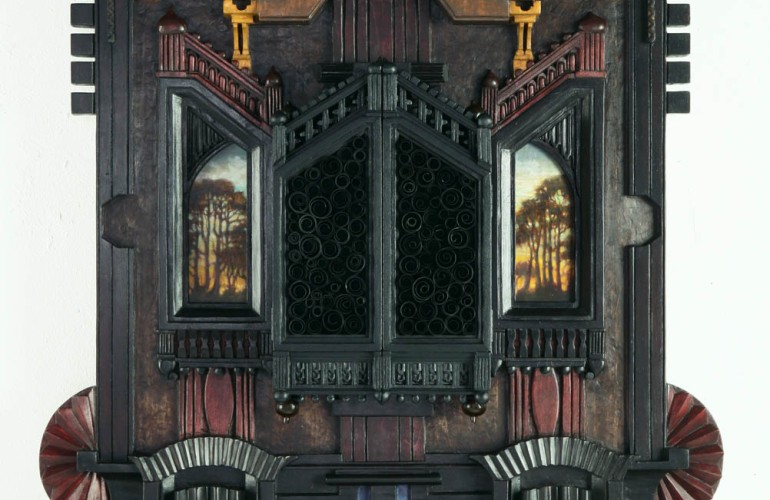 How important are frames to artworks in the contemporary world? Can they add context  or meaning to the painting it surrounds? Well, artist Holly Lane repurposes religious items to create ornate and elaborate frames that envelop the artwork and helps give new meaning to an archaic, and somewhat dated practice.

When you visit an art gallery and look at the paintings, do you ever stand there and contemplate about the frame that encases it? No, me neither! You want to enjoy and consider the work in the time you’ve got.

But frames, once upon a time, held more significance and meaning to the painting than it ever could in contemporary galleries today. That’s why when I discovered Holly Lane’s artwork, I was absolutely delighted to see this archaic practice turned on its head. And not in the contemporary, fresh modern way you would expect.

There are diverse, hidden meanings interweaved in these beautifully handcrafted sculptures, which the artist explains…

While pondering the nature of frames, I found some illuminated manuscripts in the University library, and saw how the borders visually commented on the text, sometimes even spoofing the text.  From this discovery I realized that a frame could be many things; it could be an informing context, an environment, a fanfare, a shelter, it could extent movement, it could be a conceptual or formal elaboration, it could embody ancillary ideas, it could be like a body that houses and expresses the mind, and many other permutations.  From that point I began to create pieces that fused frame and painting, with some pieces having doors that open and close over paintings to suggest; contingency, time, potentiality, future, past, or cause and effect.

By fusing frame and painting, Lane has created these quietly mystical landscapes that are housed in gothic religious relics from some bygone Germanic period, with lederhosen and all. They become objects of her artistic expression. 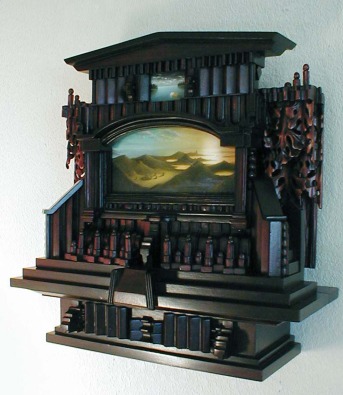 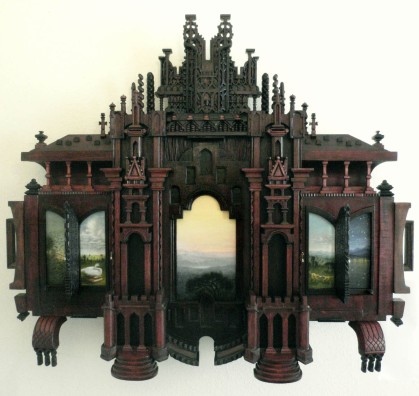 These cuckoo-like structures however, are only marginally different historically to what frames were used for. A physical support, an enhancer of the work, an altar piece, a border. Her churchly, pastoral surrounds are steeped in tradition, and gives us an alternate view of the frame in art.

Already, I’m warming up to the idea of frames! Not as an afterthought to the work, but as a considered part of the process. This antiquated but rather beautiful view of what frames can do today, and their purpose, are described here in an article by Emma Crichton-Miller for Christie’s auction house:

Frames are the Cinderellas of the art world; they do a tremendous amount of work. They protect the artworks they support; they show off the qualities of a picture, drawing attention to its formal structure, its patterns and colours, enabling them to resonate fully with a viewer; they mould the response of the viewer to the work by suggesting the value we should attach to it; they accommodate a painting to its setting, acting as a liaison between the dream world of art and the decorative scheme of the museum, gallery or private home the work inhabits. They are partly furniture and partly sculpture. At their best, they are works of art, carved by the foremost sculptors of their day, and yet their own brilliance must also serve that of the paintings they encase.

Taken from ‘What goes around: The art of framing’ article by Emma Crichton-Miller

And it’s true. For some, frames can be works of art, created by talented sculptors and craftsmen/women. And for Holly Lane she is both painter and sculptor. You don’t choose to look past the frame to see the artwork, you look at them both in its entirety. And that’s definitely something to celebrate in a contemporary setting.

#throwbackthursday to Shoreditch trip last month
This little beauty of #urbanart in Hoxton brightened my day 🧡🍊🧡
Lovely spring walk at Isabella plantation! Can you spot the bird?…
Throwback to our trip to #Cornwall. Found these locker beauties on the beach at Newquay
Wishing we were back here @heligangardens on this sunny spring day! 🌺☀️
Cornwall part 2 - the mighty Tintagel walk with @iamgarethwells ⚔️
Loading Comments...
%d bloggers like this: