A thriller of a show that gives a fresh artistic, and sometimes slightly bizarre perspective on the King of Pop, Michael Jackson.

‘Michael Jackson: On the Wall’ at the National Portrait Gallery is a landmark exhibition, with an eclectic range of works from a broad mix of artists spanning several generations. From Andy Warhol, Michael Craig-Martin and Gary Hume to David LaChapelle and Mark Ryden, this is the untold influence Michael Jackson had on contemporary art. And the sight of it will make your eyes pop!

Quirky, peculiar, outlandish, eccentric, offbeat – just some of the words that sum up what Michael Jackson was, and is, in this homage to him.

Artists’ celebrating artist, we see a playful tribute to his trademark shoes on tiptoes to an imaginary beat, attached to a string of balloons; Michael posing with that famous alien E.T – nothing unusual there; and a hilarious karaoke video installation, where we see a lineup of MJ fans singing (and dancing) away to their hearts content.

But before I get carried away, let’s just take a moment to discuss first impressions and what hits you as you walk into the exhibition, because it is garish, ridiculous and awesome. Under the classical arch, you’re halted to attention by Michael Jackson, larger than life – quite literally, this painting is bloody huge – riding an elegant white stallion, dressed in ornate, elaborate armor, adorned by cherubs holding his crown of wreath. Kehinde Wiley’s ‘Equestrian Portrait of King Philip II (Michael Jackson)’ is the final commissioned portrait of Jackson and was finished posthumously.

Drawing influence from old masters, in particular, Peter Paul Rubens and his painting of Philip II, this work is dramatic, bold and gives some credence to his given title as the King of Pop. His majestic majesty looks down at us, commanding the stage of his show.

Moving away from his gaze, we pass through a red room and Michael Jackson’s trademark penny loafers on tiptoe and spotlighted, with a bunch of balloons attached, in his well known ‘the freeze’ dance move. It’s quite a dramatic sight. From here to a room that charts the somewhat bizarre relationship with Andy Warhol and the subsequent prints he made. And then we see a kitsch and quirky story quilt by activist and artist Faith Ringgold displayed for the first time.

As you might expect, the show has good pacing and rhythm, you never know what awaits you around the corner of a room, or where the sound you hear in the distance will take you.

My favourite by far was the Michael Jackson karaoke by Candice Breitz. I would never be one to sing openly and in public, and so ashamedly all I can do is quietly admire and laugh at these fearless subjects, singing and dancing to his tunes, quite badly, for my pleasure. I was transfixed with this piece. Breitz filmed fans from Germany and Austria singing through the entirety of the ‘Thriller’ album. Shown side by side, there is a sense of escape, like no ones looking, as some awkwardly stand, belly dance and wear the full Michael Jackson outfit, gloves and all. And that’s what I liked about this piece; it’s relatability. Surely, none of us can deny hearing Michael Jackson come on the radio or on our ‘classic tunes’ Spotify playlist and begin singing freely away – behind closed doors of course. In this dark room, with just the fans voices to guide us through the songs, it’s a liberating experience, and a nod to the unique power of Michael Jackson’s music.

Never a true MJ fan, I can comfortably see this exhibition, on the outside, for what it is – an artistic and creative tribute to a fellow artist. It overlooks the strange, peculiar, and dare I say freakish behaviour, of his later life in Neverland, his deniable attempt to become white and the child sex abuse allegations. Because this show is about his music, his choreography and his inspiration. The King of Pop lives on, and a decade after his death, he still has our feet tapping and our hearts singing. 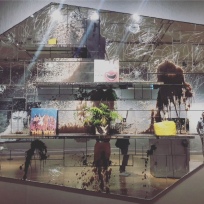 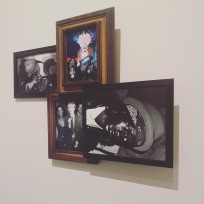 ‘Michael Jackson | On the wall’ opens until 21 October at the National Portrait Gallery.

Covered market in Oxford
Hackney Wick
Could be in Greece or somewhere, sadly just the garden centre! 🌴🌞
#throwbackthursday to Shoreditch trip last month
This little beauty of #urbanart in Hoxton brightened my day 🧡🍊🧡
Lovely spring walk at Isabella plantation! Can you spot the bird?…
Loading Comments...
%d bloggers like this: