Paintings and sculptures that fascinate and repulse, but when you get close, these bizarre organic works are anything but a delight.

At first glance, Louise Zhang’s work is drippingly sweet and seductive. Her use of neon-tastic, artificial colours are exciting and alluring to the eye, but as you begin to study the blob-like forms, these revolting (sometimes unnerving) textures begin to reveal themselves.

Zhang’s colour palette and playful sense of the grotesque take their cues both from art history and contemporary culture. The legacy of cartoons such as Ren and Stimpy, that bastion of gratuitous snot and slime and decaying flesh (which first aired the year Zhang was born), and the more sanitary but equally globular subaquatic world of SpongeBob SquarePants, can be seen in the icky textures and monstrous bulges of Zhang’s expanding polyurethane, silicone and enamel sculptures. 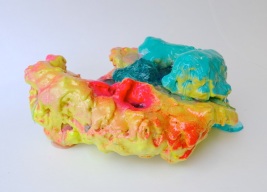 To me her sculptures look like something Bill Murray and the Ghostbusters would have found in the deep, forgotten recesses of NYC.  These futuristic pop sculptures are alive and oozing nuclear slime, and portray a jarring feeling of magic and fascination but also horror. Their fleshy appearance are kind of grotesque, and not just limited to her sculptural works, but also in her paintings.

Zhang is working in a long tradition of representing the grotesque in art. From Hieronymus Bosch’s early 16th century masterpiece The Garden of Earthly Delights, to Hogarth’s satirical etchings, right through to Patricia Piccinini’s hybrid silicone creatures, imagery of the not-quite-recognisable has always inspired conflicting responses of fascination and horror. When forms are somewhat bodily but not quite as we expect them to be, there is a response of fear and abjection. In Zhang’s work, an additional layer of confusion is introduced by her use of colour. Her saturated neon pigments are eye-catching, seductive, even cute and friendly. That these colours are a thick gloss over a blobby mound, or a congealed suspension in a glass vial, is secondary – we are initially attracted, which makes it all the more disturbing when we do come to contemplate the underlying forms and substances

Seduced yet? If not, head over to her website for more fascinating samples of her work!

Quotes written by Rebecca Gallo and taken from her website

I’m not going through there…
Majestic af. Can you spot the 🐿
So glad I got to see this before it goes. Amazing light installation/experience from @ryoji_ikeda @180.studios
Best version of a pigeon 🪶
Blue skies and some sort of fruit 🍎
It’s been a long time, but I finally got to see a show @royalacademyarts and #davidhockney no less! Would recommend if you like trees 🌳 ☺️
Loading Comments...
%d bloggers like this: